Although it’s not something they’ve come up with on their own, to be fair the party is embracing the zeitgeist of an electorate bitter and bruised by Fianna Fáil activities and the recession. The key points of Labour’s agenda for “a merit society, where those in public life take responsibility for their actions; where transparency is the norm, not the exception; and where the public interest is at the heart of decision-making” are:

The party has actually managed to skip a whole point from its summary: making good corporate governance a requirement, not an option. *sigh* Purely looking at the point list above, one and two are extremely vague and very much children of our times. Point three has been around as long as big business and shouldn’t surprise anyone, given Labour’s socialist origins (even if it would be great for Irish politicis). The last point should be supported as widely as possible.

Digging in to the document itself, I found the plan for cleaning out the bank boards to be short on substance. It’s basically fire everyone on the boards of banks covered by the Government’s savings guarantee. Not original, and not necessarily right either as it would gut the banks of expertise and punish people who may not have had a guiding role in the bad practice of recent years. Following the indiscriminant firings, the party wants a banking commission to “oversee the rebuilding of the banking sector according to much stricter criteria”. The body would have to approve banks’ business plans and oversee all board and executive appointments.

And that’s it as far as cleaning up the banks is concerned. Some might say it’s enough, but I’d like to know a lot more about who appoints the commission and what its precise legal standing and powers would be. There’s no mention of what sanctions it can take against a bank it sees as stepping out of line.

When it comes to making good corporate governance the law, I think it’s hard to dispute that that might be necessary. However, I take issue with the plan to prevent non-executive directors to sit on a board for more than seven consecutive years. Where would it end? The precedent could quite easily trail out into other sectors (I am aware that there is already a limit to presidential terms, but that’s a public office voted for and supported by taxpayer money). I don’t know how many people would like to be told they can only do a job for seven years at a go (unless they hate it).

Some slight alarm bells when it comes to property:

“To ensure that Ireland is never again devastated by a property bubble, Labour in government would:

While ending tax incentives is fine, I was slightly alarmed at the first point. Does the strategy mean “current” as in 2009, or will it be applied to land values whenever the purchase (this only applies for buying land for public works such as schools, etc) takes place? Bear in mind that the report it cites was written in 1973 — unless Labour wants 1970s land prices to apply.

Okay, I’m being flippant with the last sentence. But who will determine “current use value”? And why would the State be willing to add a 25% premium? Certainly, it would encourage people to sell land to the State over private developers, but at what cost to the exchequer? Ireland is already swimming in debt and the school building programme is being knifed. Also, there is nothing in that point that would stop land prices from spiralling out of control in the future. Nixing tax incentives will help, but considering that Labour wants to prevent a property bubble from happening again the party doesn’t seem to have addressed all the issues.

I can happily state that I’m in favour of the party’s aim that “no one individual should be able to use his or her personal wealth to decide the content of our Constitution”. However, while I accept that limiting political donations and introducing spending limits on elections from local to European and general is a good way to go, there’s nothing in the document about what actions can or might be taken in the event that the law is abused. Limiting a donation does not necessarily limit access, even if point five, regulation of political lobbying, makes some strides in this regard. Hopefully the party will make a concrete definition of “a lobbyist” if it gets into power and can bring the legislation forward. Generally speaking though, the party’s attitude toward political funding and lobbying is a good way of levelling the playing field and contributing toward transparency.

The plan to extend Oireachtas oversight of the Government is weak. Yes, ministers would be obliged to give full answers. But that doesn’t change the fact that the Dáil is responsible for monitoring the government. A majority of TDs in favour of one party isn’t going to vote in favour of that government’s decisions being scrutinised. Why should politicians be watching over themselves, if Labour wants to ensure that banks and business can’t regulate themselves?

The Freedom of Information Act needs an absolute overhaul and Labour’s strategy on this is worth reproducing in full:

The high charges for information are an affront to transparency (I accept that a certain level is necessary for merely handling the requests, getting the information, and dissuading time wasters) and the fact that many State agencies are exempt from the Act is absurd. Do I speak here with a journalist’s bias in favour of information? Possibly. But it is difficult to argue that the Act as it stands is crippled and limits access to the material necessary for transparency.

Overall, it’s a mediocre but sincere effort from the Labour Party. As a broad plan it’s decent enough, and some of the plans are well enough advanced that they might even come to something. However, and while I appreciate that the document was likely written with clarity in mind, because that would just switch off readers, it has a long way to go.

Councillors running in the upcoming local elections are putting flyers through letterboxes marked “sorry I missed you” — but aren’t actually calling to the door. The notes are handwritten in biro, but the doorbell is left unrung and nobody knocks. This happened to me yesterday while I and two other people were in the house (there were two cars outside), and similar stories have been discussed on local radio. I got one from Councillor Tim Lombard of Fine Gael, although I categorically stress that I don’t know which parties the other runaways belong to. Regardless, it’s not very good form from a man whose slogan is “keeping in touch”.

I can understand a Fianna Fáil candidate doing this — that party is likely to suffer greatly in the elections due to economic mismanagement and the emergency budget — but surely Fine Gael would want to do its utmost to capitalise on this. Do they not want to answer questions? Do they want to avoid being caught up in an “all politicians are shits” rant at the doorstep? Or are they not handing out their own flyers and writing the little notes as a way to hide this? I couldn’t see who dropped the leaflet through, just a flicker of shadow at the door.

Has this happened to you? What do you think of it?

Not content with wanting to solve the economic crisis, withdraw from Iraq, win the war in Afghanistan, and transform US energy policy into one that’s green-friendly, Barack Obama is working on a world free of nuclear weapons. In two 26-minute speeches this week

the president pledged a drive on nuclear disarmament, possibly bigger than any ever attempted. He spelled out how he would accelerate arms control agreements with Russia, following his first summit meeting with President Dmitry Medvedev last week. The deal to conclude a new arms reduction treaty with Moscow, which would slash stockpiles by about a third was a beginning, setting the stage for further cuts.

In a telling nod to reality, the presidential superhero admitted this may not happen in his lifetime, which is as pragmatic as it is putting the onus of resolution on future generations. Still though, his fresh take on military and security policy is to be commended and supported as much as possible. While the threat of nuclear war is quite small — the greatest potential lies in an Israeli strike on Iran, because despite all the posturing and controversy over the US missile shield, Russia has too much to lose — the possibility of a terrorist or rogue group getting materials is quite real.

If nothing else, Obama’s grand nuclear-free plan would lead to an unprecedented level of international co-operation as nations’ policies are set aside for the greater good.

If he can get it off the ground, that is. 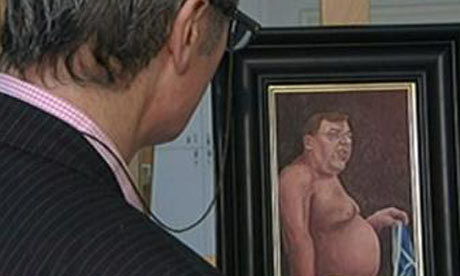 That’s a party convention, for those visiting Tiny Planet from outside the Republic. Our illustrious, handsome, magnificent, and altogether popular ruling party is holding a love-in to discuss the state of the party and the economy. Gavin is liveblogging: follow him here or here.

Hypermiling might be the word of the year but I prefer topless meeting. Only it’s not what you think.

Fine Gael’s economic ‘plan’ dissected in far better fashion than I can muster.

Take that you spammy feckers.

If we could resurrect neanderthals by cloning, should we?

The town where no one is allowed to die.